That’s a process which will keep unfolding long after the anniversary of the lockdown of March 25, 2020. 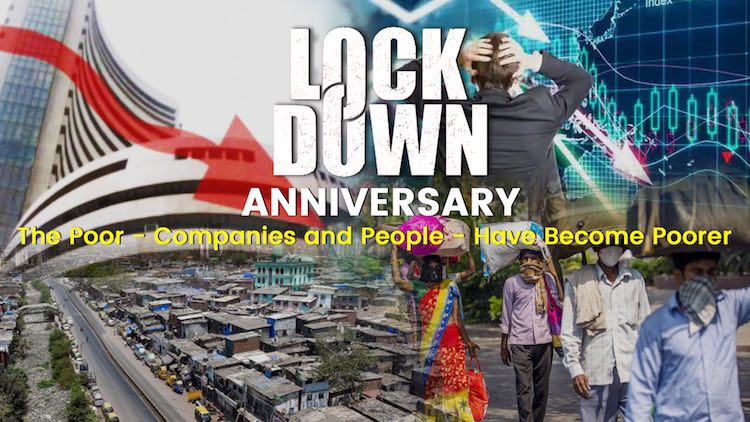 This is an anniversary no one is celebrating including the Government which plasters newspapers at the hint of any achievement, factual of fictional. After a year of the national lockdown- one of the severest in the world- India is claimed to have achieved a “V Shaped Recovery” as proclaimed in colorful graphs and charts released before the presentation of Union Budget 2021-22. But a cursory look at the numbers, culled out by credible national and international agencies, show one common thread, poor people and poor companies have been hit harder as the impact of the lockdown created joblessness and squeezed incomes.
Also Read:
Manufacturing Still Under Stress, New MOSPI Data Reveals Critical Decline

First, let us talk about the people. The per capita income loss has been more than the loss of GDP over all. Incomes have shrunk by 8.9% while the GDP shrunk by 7.2% according to the Ministry of Statistics and Programme Implementation. Moreover, United Nations Conference on Trade and Development (UNCTAD) in its report has flagged that in “accumulated real income loss” due to the economic impact of Covid 19 pandemic, India has lost 27.7% of its income. It has calculated that without the Pandemic and the resultant lockdown, the growth would have been much stronger. That’s the worst performance among 20 countries for which the research was carried out with a global average loss of 12.3%. Though the recovery in economic activity is underway where India may perform better than the average 4.7% global GDP growth, but the “destruction of income on an unprecedented scale” will have a lasting impact on the developing countries, the report says. Staying with the people, the PEW Research Centre estimates that 33 million out of total 99 million Indians have dropped out from Middle Income Tier ($10-20 a day) to join the Low Income Tier ($2-10 a day) in 2020. Additionally, the number of poor- whose income is less than $2 a day- has increased by a staggering 75 million, or 7.5 crore. Overall, 1 million Indians have slipped from High Income strata who earn more than $50 a day and 6 million from the Upper Middle class who earn $20-50 a day. Thus, the upward economic movement of Indians since the beginning of this century has been almost wiped out during the year. An ILO research had reported in 2014 that India had uplifted nearly 15m people from the low income groups with incomes of less than $2 a day. Now let us talk about the business and Indian companies. During the last one year the market has seen heady peaks. The Nifty has scaled up from 8317 to 14307 today and the Sensex has hit 48332 from 28535 exactly a year ago, though it now sees some headwinds. The Market Capitalization has crossed Rs 207 trillion which is now more than the country’s GDP at Rs 194 trillion. Here too the concentration of wealth is unprecedented. There are 3824 listed companies on the Bombay Stock Exchange, but the 6 top companies share more than 25% of this market cap. Half of the market cap is shared by 32 companies. And only 284 stocks traded at the bourses out of the 3824 corner 90% of the market cap. That proves that the pandemic and its impact has led to inequality even in the corporate world. The Lok Sabha was told that more than 10000 companies have shut shop this year, mostly in Maharashtra and Delhi. In a never ending blitz of advertisements, social media posts and government sponsored anniversary functions, India has been told that the fight against Covid19 pandemic has been a success as nowhere in the world, notwithstanding more 16,0000 lives lost. The impact would have been much worse if the government had not enforced a lockdown at a 4 hour notice. But the long term impact on the economy is yet to roll out. The incomes lost have led to millions into abject poverty endangering lives at an unimaginable scale. That’s a process which will keep unfolding long after the anniversary of the lockdown of March 25, 2020.