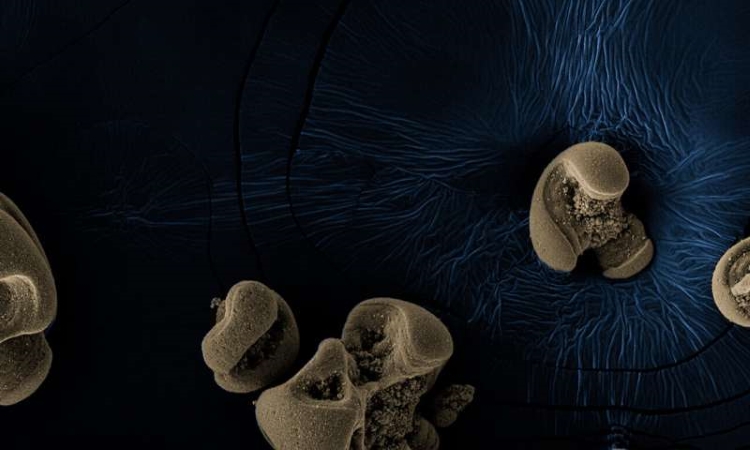 Caltech microbiologists have discovered bacteria that feed on manganese and use the metal as their source of calories. Such microbes were predicted to exist over a century ago, but none had been found or described until now. "These are the first bacteria found to use manganese as their source of fuel," says Jared Leadbetter, professor of environmental microbiology at Caltech who, in collaboration with postdoctoral scholar Hang Yu, describes the findings in the July 16 issue of the journal Nature. "A wonderful aspect of microbes in nature is that they can metabolize seemingly unlikely materials, like metals, yielding energy useful to the cell."
Also Read:
Bihar: Bridge Constructed 29 Days Ago at a Cost of Rs 264 Crore Damaged by Flood

The study also reveals that the bacteria can use manganese to convert carbon dioxide into biomass, a process called chemosynthesis. Previously, researchers knew of bacteria and fungi that could oxidize manganese, or strip it of electrons, but they had only speculated that yet-to-be-identified microbes might be able to harness the process to drive growth. Leadbetter found the bacteria serendipitously after performing unrelated experiments using a light, chalk-like form of manganese. He had left a glass jar soiled with the substance to soak in tap water in his Caltech office sink before departing for several months to work off campus. When he returned, the jar was coated with a dark material. "I thought, 'What is that?'" he explains. "I started to wonder if long-sought-after microbes might be responsible, so we systematically performed tests to figure that out." The black coating was in fact oxidized manganese generated by newfound bacteria that had likely come from the tap water itself. "There is evidence that relatives of these creatures reside in groundwater, and a portion of Pasadena's drinking water is pumped from local aquifers," he says. Manganese is one of the most abundant elements on the surface of the earth. Manganese oxides take the form of a dark, clumpy substance and are common in nature; they have been found in subsurface deposits and can also form in water-distribution systems. "There is a whole set of environmental engineering literature on drinking-water-distribution systems getting clogged by manganese oxides," says Leadbetter. "But how and for what reason such material is generated there has remained an enigma. Clearly, many scientists have considered that bacteria using manganese for energy might be responsible, but evidence supporting this idea was not available until now." The finding helps researchers better understand the geochemistry of groundwater. It is known that bacteria can degrade pollutants in groundwater, a process called bioremediation. When doing this, several key organisms will "reduce" manganese oxide, which means they donate electrons to it, in a manner similar to how humans use oxygen in the air. Scientists have wondered where the manganese oxide comes from in the first place. Credit - California Institute of Technology