Mob Lynching: 2 Cases In 24 Hrs In Punjab Over "Blasphemy" 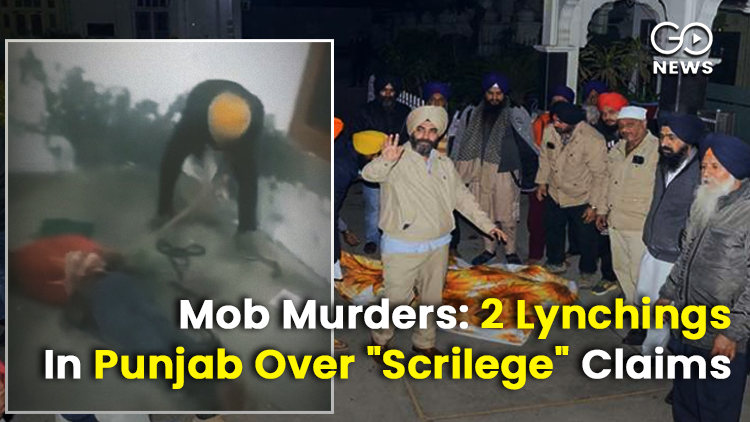 There have been two incidents of mob lynching over two days in Punjab. A crowd assaulted and eventually killed two people in the Golden temple, Amritsar, and in a gurudwara in Kapurtala district. The Punjab government has constituted an SIT to look into the matter and has sought a report within two days. What Is Blasphemy or Sacrilege For Sikhs?
Also Read:
Why India is neglecting its methane problem ?

Sikhs believe that the Guru Granth Sahib the holy book of Sikhism, is a ‘living Guru’ after the tenth and final Guru, Gobind Singh, and everything associated with this book is therefore considered sacred. Any perceived ‘insult’ or disrespect to this book and other religious articles such as the kirpan, pagdi (turban), and the rumala, is considered ‘blasphemous’ for Sikhs. Therefore, any damage, or tearing, burning, and breaking of the book and these articles is considered sacrilegious. 2 Incidents Of Mob Lynching In 24 Hrs  Punjab has seen three incidents of mob lynching within a week, whereas two people were beaten to death by mobs within 24 hours in the state over claims of ‘blasphemy’. On Saturday, a youth was severely beaten and assaulted by a crow within the premises of the Golden Temple in Amritsar. The allegation was that the youth climbed over the grill around the Guru Granth Sahib, the holy book of Sikhism, and proceeded to trample the ‘rumaala’, a cloth covering, with his feet, and also touched the ceremonial sword nearby. Officials nabbed him in the meanwhile and took him to a room for questioning, after which the youth was taken in a wheelchair to SGPheadquarters. DCP Parminder Singh Bhandari claims that the youth was badly beaten even as he was being taken away. Mob In Lynching In Kapurtala As Well! The lynching on Saturday had not even completed 24 hours when another such incident in Punjab’s Kapurtala came to light. A person was ‘caught’ and assaulted in a Gurudwara in Nizampur village in Kapurtala district. The allegation on the person was that he had ‘insulted’ the ‘Nishaan Sahib’, the flag carrying the sacred symbol of Sikhism. Police reached the spot and took the accused into custody, although the crowd was adamant that he be questioned on the spot, after which the inflamed crowd even ran up against the police and lynched the person. Last week, a youth named Raghuvir Singh had also thrown the ‘Gutka Sahib into the pond within the Golden Temple premises. The Gutka Sahib is a pocket book which contains selected verses from the Granth Sahib. The Indian Express quoted a political scientist to say that the repeated incidents of blasphemy against Sikhism and the reactions to it reflect a climate of insecurity in the community. At the Singhu border of the national capital which was once of the centres of the recently-concluded farmers’ protest, a man was similarly accused of blasphemy and murdered in a gruesome way by a section of Nihang Sikhs, and the body was hung at the site with its limbs chopped off. Critics also say that repeated incidents of ‘blasphemy’ against Sikh holy books and the lack of any stringent action against in such matters are fuelling this kind of violence. According to a report by First Post, there have been 100 such cases from 2015 until now, of which charges were framed in only 50% cases. Blasphemy has become such a major issue in Punjab that it has made it to the election manifestoes of several parties in the state. Before the 2017 Assembly elections in the state, many parties had promised to take actions against such incidents. Even the ruling Congress felt the heat of the matter and it was believed that its government itself was in danger for not promptly acting on blasphemy cases.