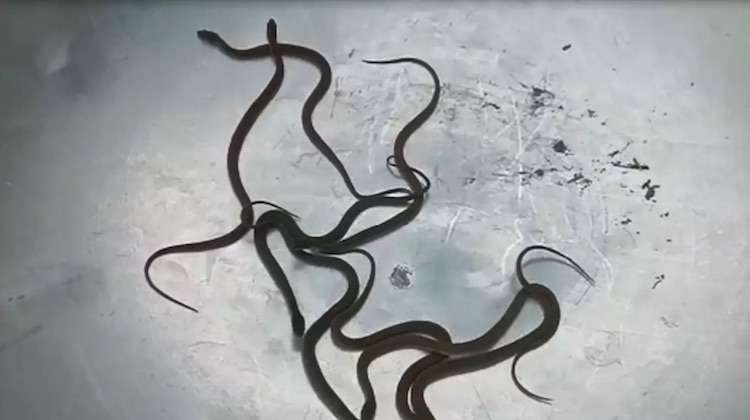 A family in Madhya Pradesh’s Bhind district is beleaguered by a virtual infestation of snakelets (young or small snakes). In just one week, 123 snakelets have emerged out of their home and the entire family is having sleepless nights because of it. Ram Prakash Kushwaha, the head of the family, has been staying awake for the last eight nights and is catching up on lost sleep during the day.
Also Read:
Indian Circus Industry Staring At Bleak Future In The Shadow Of Pandemic

According to him, 20 cobra snakelets are being found in the house daily and on Wednesday, 52 such snakelets emerged together.  There are 12 people in Ram Prakash’s house, who are stunned by this development and unable to sleep currently. They have to resort to sleeping in their neighbour’s house at night. Ram Prakash said that three months ago, a large cobra had emerged out of the store room in the evening. It had been taken to the jungle and released there but now, for the last eight days, cobra snakelets are being found regularly. According to Iqbal Ali, a Professor of Biology in the state, one cobra can lay more than 200 eggs at one time. Within seven days of hatching, the colour of the snakelets turns black and seven days after this, they grow poisonous fangs. However, snakes found in the residential areas of the country are either marginally or negligibly poisonous. Only four snakes - the Indian Cobra, Krait, Russell Viper and Saw-Scaled Viper - are extremely poisonous. It is difficult for people to survive after being bitten by them. Watch the video story here: