Earlier, the Court had said that the government appears to be reluctant to “take a stand” on the matter and asked it to clarify, through an affidavit, whether it had used the Pegasus software. 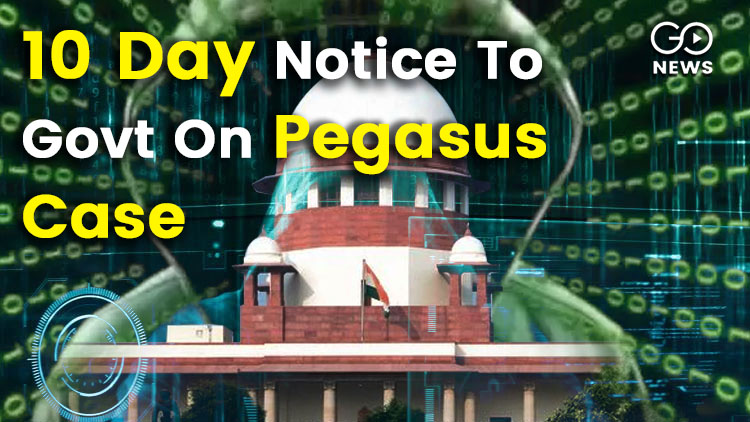 A three-judge bench of Chief Justice NV Ramana, and Justices Surya Kant and Aniruddha Bose issued a 10-day notice to the Union Govt. in its hearing on a batch of petitions regarding the Pegasus Spyware. Legal news portal Bar and Bench has reported that the Government proposed to put the matter before a “neutral” Expert’s Committee instead of divulging details to the public, for “national security” reasons.  The committee can then present its report to the Court.
Also Read:
India Silent On Taliban Takeover Of Afghanistan, New Regional Challenges To Emerge

The Court questioned the SG on this proposal. It held that establishing whether the spyware was used is one issue, and determining authorization for its use was another. “The issue of permission, sanction, procurement, non-procurement, etc who will examine that?" the Bench asked. In response, SG Mehta said that "Your lordships can invoke the power under Article 32 and confer the committee with the terms of reference" Senior Advocate Kabil Sibal had argued that “We don't want the government, which might have used Pegasus, to set up a committee" Solicitor General Tushar Mehta, appearing for the Centre, said that the petitioners’ demands for an SIT (Special Investigation Team) probe into the issue would alert unlawful organizations and terrorists by revealing crucial details. “Govt does not mind saying it before an expert group. Suppose a terrorist organization uses technology to communicate with sleeper cells and we say we are using Pegasus they will modulate the apparatus in such a way that it is not Pegasus compatible” Bar and Bench reported him as saying to the Bench. Earlier, the Court had said that the government appears to be reluctant to “take a stand” on the matter and asked it to clarify, through an affidavit, whether it had used the Pegasus software. SG Mehta had maintained that “there is nothing to hide or that needs examination”, and that the case was based on a “sensational story” by a web portal right before a Parliamentary session. The facts could not be placed in a usual affidavit since it has “national security implications” Senior Adovacate Kapil Sibal contrasted India’s response to that in other countries: “France has started a national level probe through court procedures, Israel is also conducting inquiry. Indian government says all is fine.” Senior Advocate Rakesh Dwivedi said that the government was being ambiguous regarding whether or not it has used the spyware: “There is nothing in the Minister’s statement that government is NOT using Pegasus. There’s nothing that says they haven’t used the facility and agencies are not using it...". He argued that Privacy is a fundamental right and the use of surveillance tools like Pegasus should be under a law of Parliament.