The counting of votes is underway in all 403 assembly seats in Uttar Pradesh, and the Bharatiya Janata Party is edging closer to forming the government, according to the Election Commission's latest update as of 12 p.m. The BJP currently holds a 270-seat majority, but it appears to be losing 53 seats. The Samajwadi Party is expected to gain seats from the BJP's losses. According to the latest polls, the Samajwadi Party is leading in 123 seats, with a 70-seat advantage over the previous election. The Bahujan Samaj Party, on the other hand, is leading in five seats and lost 14 seats compared to 2017. While the Congress now holds a four-seat advantage, the party appears to be losing 15 seats.
Also Read:
Assembly Election 2022: Results Of 5 States Elections Top News

From the electoral rallies in Uttar Pradesh, it was clear that the BJP would have a difficult election. However, as predicted by exit polls, the same calculation's outcomes are being witnessed. The BJP, for example, had to create the government again after 12 exit polls, while the Samajwadi Party did not receive a single vote. That is to say, the Samajwadi Party's chances of victory were nil. It was thought that the opposition parties' electoral strategy on unemployment, inflation, education, and health in the UP elections would pay off, but the outcome seemed to wreck everyone. In practically every rally, Samajwadi Party Chief Akhilesh Yadav was heard saying, "This election is the last battle of democracy; after this, the people will have to revolutionise for change." On the other hand, efforts were made to polarise the Bharatiya Janata Party's top workers, including Yogi Adityanath (CM), Narendra Modi, Amit Shah, Rajnath Singh, and other senior leaders, which appears to be working.
The election results show that Yogi Adityanath's 80-20 policy overshadowed the Samajwadi Party's unemployment, inflation, education, and health strategies. Despite the government's failures in the Corona epidemic, rising prices, unemployment, and hate-filled political techniques, Narendra Modi's popularity has not dwindled, according to the election results. In UP election rallies, Narendra Modi was clearly witnessed making insults against a certain community, on which the Election Commission kept mute and the people of Uttar Pradesh gave their approval. According to the numbers, the BJP received only 15.2 percent of the vote in Uttar Pradesh in 2012, winning 47 seats. Modi's popularity propelled the party to 325 seats in the 2017 election, with a vote share of 41.5 percent, a 26.3 percent increase. 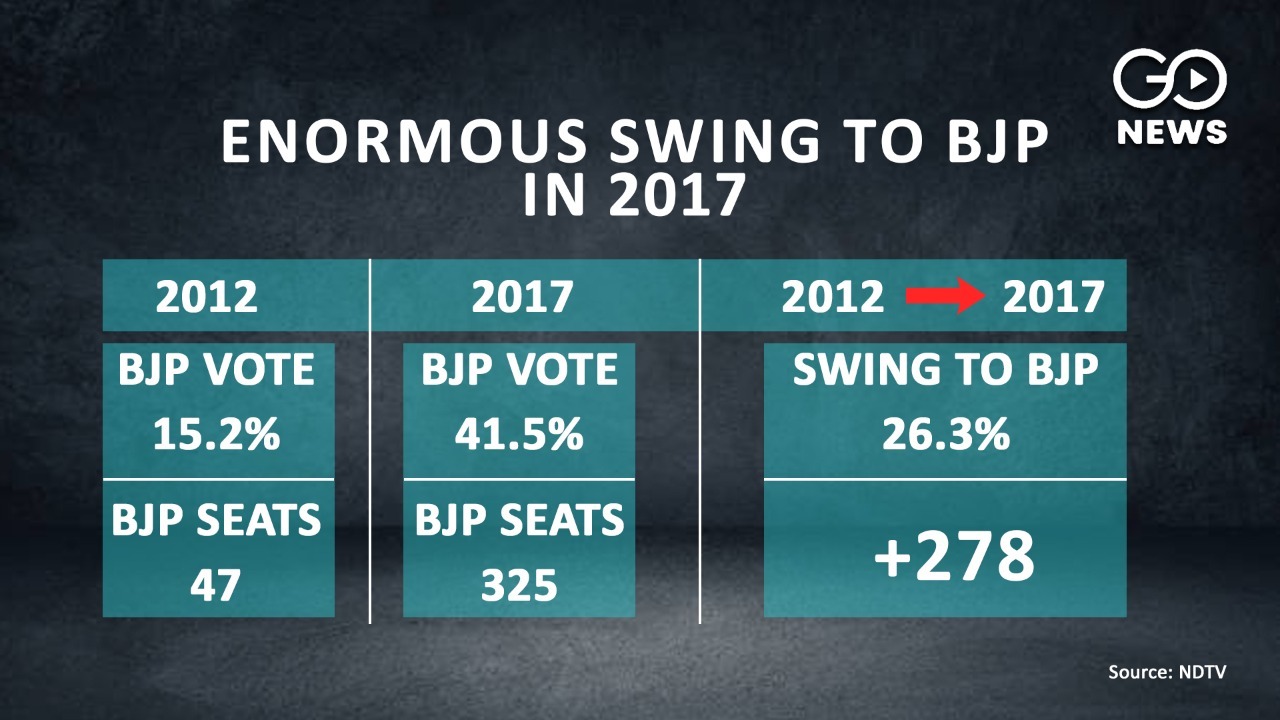 Now, according to the CSDS-Lokniti exit poll, the BJP will receive 43% of the vote, which is more than in 2017.
Another unique feature is that no party has been able to win the election in Uttar Pradesh for the second time since 1996. The BJP, for example, formed the government in 1996, only to lose the next election to the Samajwadi Party in 2002.