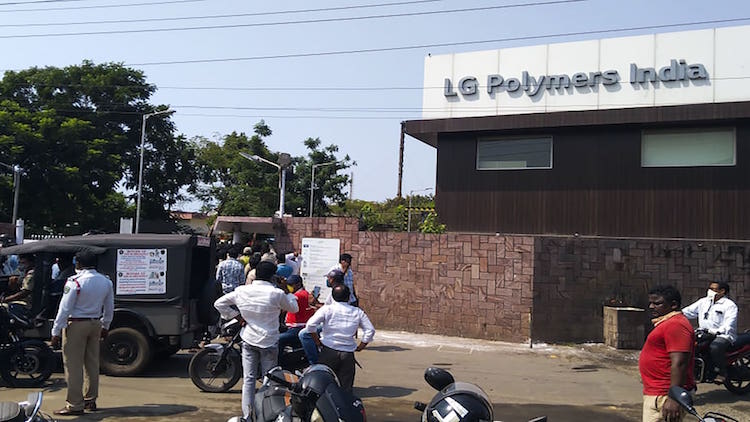 The Styrene gas leak disaster on Thursday at Gopalapatnam in the vicinity of Visakhapatnam, which left 11 dead and up to 1,000 critically sick, affected an area of about two kilometers covering four villages inhabited by skilled workmen residing in pucca houses.  The management of the South Korean owned LG Polymers response was quick but timid. LG should have tendered an unconditional apology and announced handsome compensation for causing deaths and injuries. Instead, LG is defending itself. LG says due to COVID-19 the government had declared a lockdown and the factory was closed down.  It remained closed for 44 days. At 12 midnight of Wednesday, it was opened to start operations. The fuel was ignited, the machines moved, raw material was fed which included Styrene in liquid form. By 2.30 AM Styrene in gaseous form started emitting. It could have been controlled but Styrene gas in very small quantities does leak. This is the point of negligence. Negligent officers did not or could not correctly assess the volume of leakage. Knowledge, experience and alertness were needed at this point of time and stage of the manufacturing process. LG officers failed, resulting in massive leakage of Styrene gas. Styrene liquid and Styrene gas are both notified as hazardous by Parliament under The Hazardous Chemical Rules, 1989. These rules provide statutory guidelines on safety in manufacture, storage and import of hazardous chemicals. The National Green Tribunal, Principal Bench, headed by Justice Adarsh Goel taking suo-moto judicial notice of the LG Gas leak disaster in an interim order directed LG to deposit Rs 50 Crores for causing harm to environment to a high degree resulting in 11 deaths and injuries to a whole lot of people. One thousand affected persons are admitted in various hospitals in serious condition. The Tribunal has the power and the jurisdiction to impose penal damages and exemplary damages over and above actual damages. LG officers on May 7 ought to have taken prescribed precautions before starting the chain of process in the manufacture of Polymer by using Styrene as an ingredient. A fitness report of storage tanks and tank seals ought to have been sent to the Andhra Pradesh State Pollution Control Board with a copy to the Central Pollution Control Board for information so that in case they are not satisfied they have the power to stop the manufacturing process forthwith. Rule 4(2) HC Rule was ignored by LG. LG had control of industrial activity therefore it was duty bound to provide a status report to show that it had taken adequate steps to prevent a major accident and to limit its consequences to persons and environment.  Health and Safety are the basis of environment laws. Law of Tort ensures adequate compensation for destroying environment and causing death and injury to human beings. In 1996, Justice Kuldip Singh, Judge Supreme Court, introduced Polluter Pays Principle, Precautionary Principle and Paren Patriae Principle, the fiduciary relationship of placing the State in the position of a legal caretaker. All these fall in the civil jurisdiction and civil jurisprudence.  On the criminal side, the police have the power to register a FIR for murder of 11 persons and causing grievous hurt to more than one thousand innocent persons. Both are cognizable offences. The police have the power to arrest officers of LG without a court issued warrant. The liability of the principal management, that is Board of Directors of the principal company, is the same as the LG officers managing the Visakhapatnam factory. All these lawful punitive actions can be taken. After investigation and collection of evidence and permissions from the pollution board, the factory may be permitted to operate with all safety compliances in place checked. (Vijay Panjwani is a Senior advocate and lawyer for CPCB. He also assisted US courts in New York against Union Carbide in the Bhopal Gas leak case)