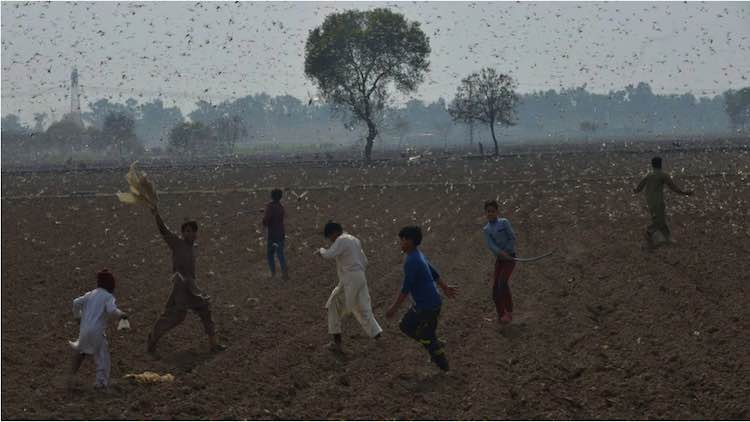 Huge swarms darkened the sky in Jaipur in recent days; one resident of Rajasthan’s biggest city said it was like being “overtaken by aliens,” the New York Times reported. However, the biggest threat is to farmers and poor rural communities already hit hard economically by Covid-19. Pakistan’s eastern provinces were first overwhelmed in the winter. Fresh swarms are just beginning to take to air and are expected to grow until mid-summer. Pakistan’s government approved a National Action Plan for locust control in February and airborne spraying of some 300,000 litres of insecticide is taking place. Climate change has played a role in the locust plague. It started after exceptional cyclonic rainfall moistened the “Empty Quarter” deserts of Saudi Arabia in 2019. Biblical quantities of locusts hatched and have been breeding ever since. The swarms were swept eastwards through Iran to Pakistan by seasonal winds. After breeding in Pakistan’s eastern deserts, the locusts took to the air again in late winter. Now, another generation has hatched, and crossed into India. Imminent danger “Towards the end of May and in June and July, high level migration is expected,” warns Tariq Khan, director of the Technical Department of Plant Protection in Pakistan’s Sindh province. Farmer Ghulam Sarwar Panhwar saw millions of the pests devour his cotton and moringa crops in just a few hours. “This was their second attack this month. With locusts attacking our crops during the day, bats attacking our mango orchards at night and coronavirus attacking us in our homes day and night, where do we go?” asks Panhwar, who owns two farms totalling 300 acres in the Hyderabad district of Sindh. The pesticides used by the government are carcinogenic to humans and poisonous to wildlife, warns Sohail Ahmed, an animal biologist at the University of Agriculture in Peshawar. “No bio safe pesticide is being used at the moment. These chemical sprays are toxic for the environment and will affect humans, wildlife and livestock.” Farmers in Sindh, Balochistan and parts of Punjab near Pakistan’s desert regions have already noticed changes. “Already the parrots have died out due to the pesticides used in fruit orchards. I’ve noticed that the crows that used to eat the locusts have stopped coming,” says Panhwar, who fears the impact on the water supply, soil and crops. Simple solution With the locust problem escalating, an innovative pilot project in Pakistan’s Okara district offers a sustainable solution in which farmers earn money by trapping locusts that are turned into high-protein chicken feed by animal feed mills. It was the brainchild of Muhammad Khurshid, a civil servant in the Ministry of National Food Security and Research, and Johar Ali, a biotechnologist from the Pakistan Agricultural Research Council. “We were mocked for doing this – no one thought that people could actually catch locusts and sell them,” says Ali. Khurshid says they were inspired by an example in Yemen in May 2019. The motto in that war-torn country facing famine was, “Eat the locusts before they eat the crop.” They selected Okara district, as it is a heavily populated rural area of Pakistan’s Punjab. They set up a three-day trial project in the Pepli Pahar Forest in Depalpur, where huge swarms of adult locusts were reported in mid-February 2020. The forest area was chosen as it was less likely to be contaminated by insecticide. Popular idea Using the slogan, “Catch locusts. Earn money. Save crops”, the project offered to pay farmers 20 Pakistani rupees (USD 0.12) per kilogram of locusts. Locusts only fly in daylight. At night, they cluster on trees and open ground without dense vegetation and remain almost motionless till sunrise the next day. Locusts are easy to catch at night, Khurshid says. The community’s locust haul averaged seven tonnes a night. The project team weighed the locusts and sold them to nearby plants making chicken feed. Farmers netted up to 20,000 Pakistani rupees (USD 125) per person for one night’s work.

“On the first day in the field we had to send word out and around 10-15 people showed up,” says Ali. But word of the money to be made spread quickly, and hundreds of people showed up by the third day. “We did not even have to provide them with bags, they brought their own on their motorbikes. All we did was to weigh the bags and check that they were indeed full of locusts, and then pay them for their efforts.” For full story, go to thethirdpole.net